Samsung and SoFi Stadium last week revealed the name of the 70,000 square-foot, dual-sided center-hung video board at Los Angeles’ SoFi Stadium. The Infinity Screen features what Samsung describes as the most LEDs ever used in a sports or entertainment venue.

On July 21, Samsung Electronics America and SoFi Stadium revealed the name of the 70,000 square-foot, dual-sided center-hung video board at Los Angeles’ SoFi Stadium: The Infinity Screen by Samsung. 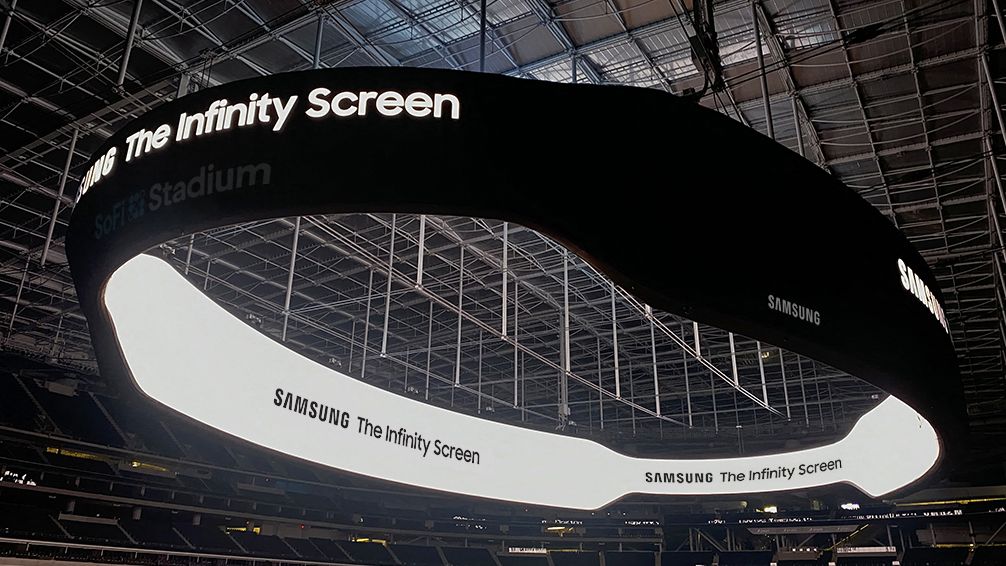 Named for its unique design and groundbreaking technology, the Infinity Screen features what Samsung describes as the most LEDs ever used in a sports or entertainment venue. With nearly 80 million pixels, each panel can be uniquely or congruently programmed with statistics, live and/or animated content. It anchors SoFi Stadium’s end-to-end 4K video production workflow. 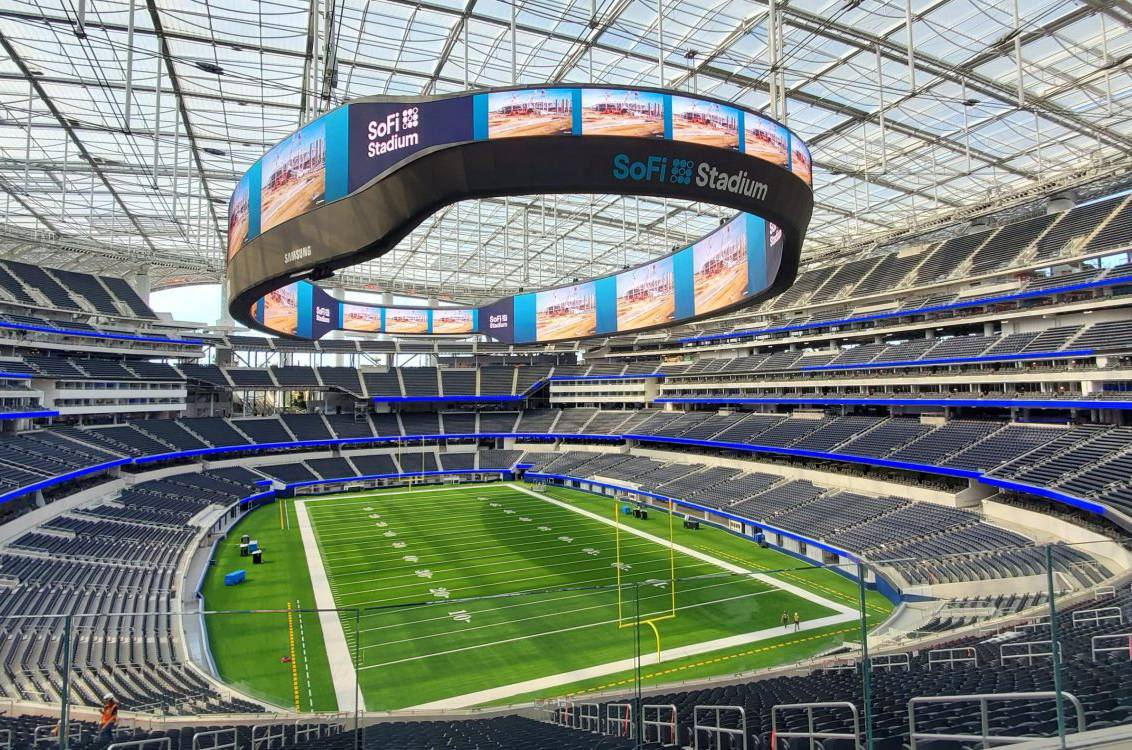 SoFi is an indoor/outdoor stadium built in Inglewood, CA, by Los Angeles Rams owner E. Stanley Kroenke that serves as the home of the Rams and the Los Angeles Chargers. The stadium is set to host a variety of upcoming events including the Super Bowl LVI in 2022, the College Football Championship Game in 2023, and the Opening and Closing Ceremonies of the Olympic Games in 2028.

“It’s been a long time coming, but we are so proud to announce The Infinity Screen by Samsung,” said Mark Quiroz, vice president, Display Division, Samsung Electronics America. “SoFi Stadium is one of the NFL’s crown jewels and it has been a privilege and an honor to work with the team on this project. We are incredibly excited to see fans engage with the Infinity Screen in person for the first time.”

The process of naming the video board at SoFi Stadium took many months of consideration and testing, with the team reviewing more than a dozen names that communicated Samsung and SoFi Stadium’s overall vision. The name “Infinity” comes from Samsung’s long history with bezel-less displays and the video board’s unique design. From mobile devices to displays like The Wall, Samsung is known for its infinite displays, and the Infinity Screen at SoFi Stadium continues the trend.

Built for the future and positioned 122 feet above the playing field, The Infinity Screen by Samsung has the largest LED content playback system ever deployed. With nearly 80 million pixels spaced 8 millimeters from center to center, each panel can be uniquely or congruently programmed with statistics, live and/or animated content. The different sizes of the video panels are designed to serve spectators in every seat, from the sideline to the upper deck, according to Samsung. Teams on the sidelines and fans sitting in the lower bowl of the stadium will view the inside of screen as it sits directly across from their line of view, while guests in the upper bowl will view the outer panels of the video board.

“We are excited to introduce the official name for our 70,000 square-foot, dual-sided video board, The Infinity Screen by Samsung. The Infinity Screen creates an absolutely stunning presence inside SoFi Stadium,” said Jason Gannon, managing director, SoFi Stadium and Hollywood Park. “It is powered by the largest graphics control system in the history of sports and is already synonymous with the next-level fan experience at SoFi Stadium.”

Located on the site of the former Hollywood Park racetrack, SoFi Stadium is the centerpiece of a 298-acre mixed-use development featuring retail, commercial office space, a hotel, residential units, and outdoor park spaces.

Last September, Samsung and Hollywood Park signed a multi-year agreement that names Samsung the official mobile, TV and display partner of Hollywood Park, including SoFi Stadium and a 6,000-seat performance venue. Samsung technology will be represented throughout Hollywood Park, reaching fans across the district’s residential, office and retail areas through the connected mobile app. 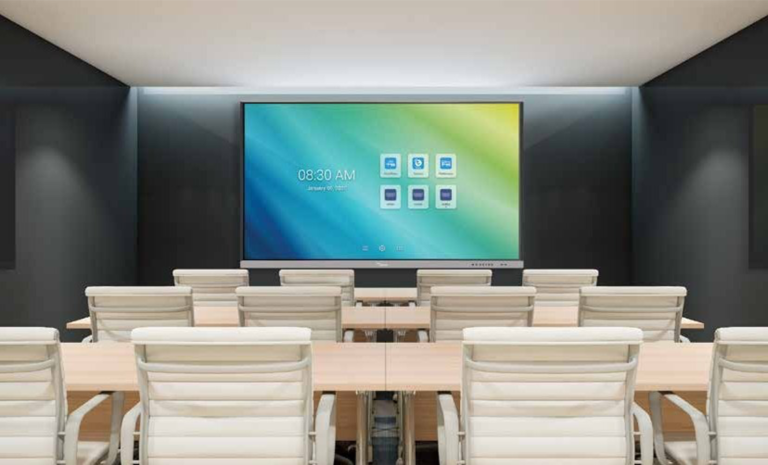 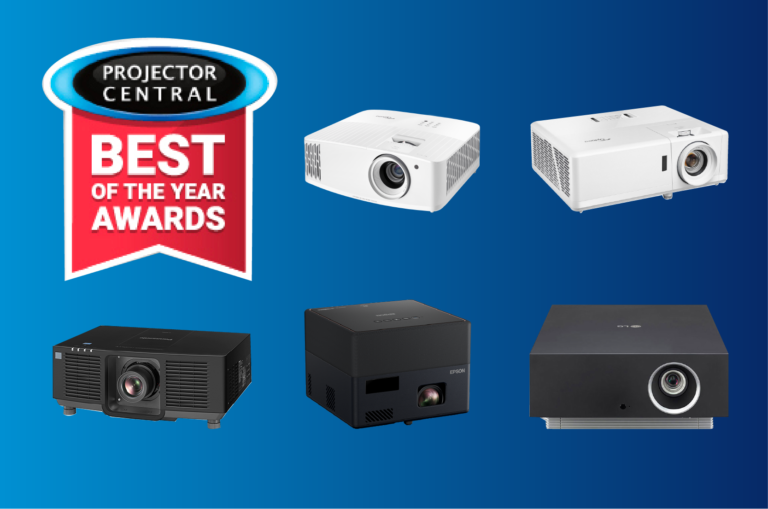 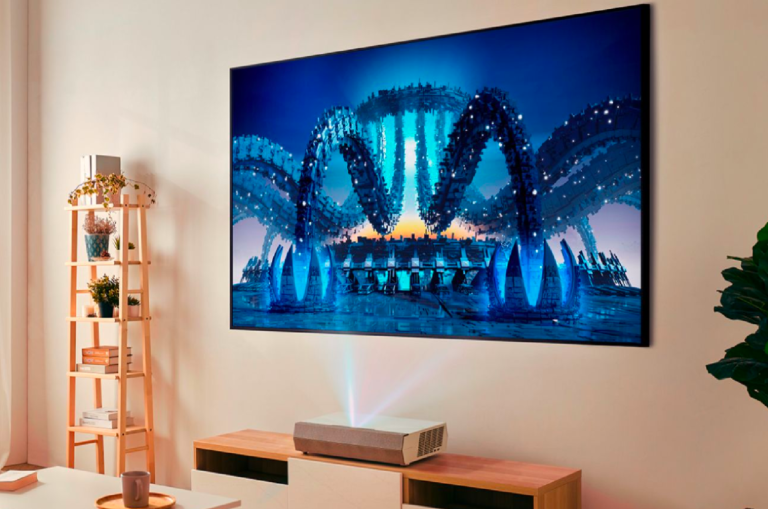 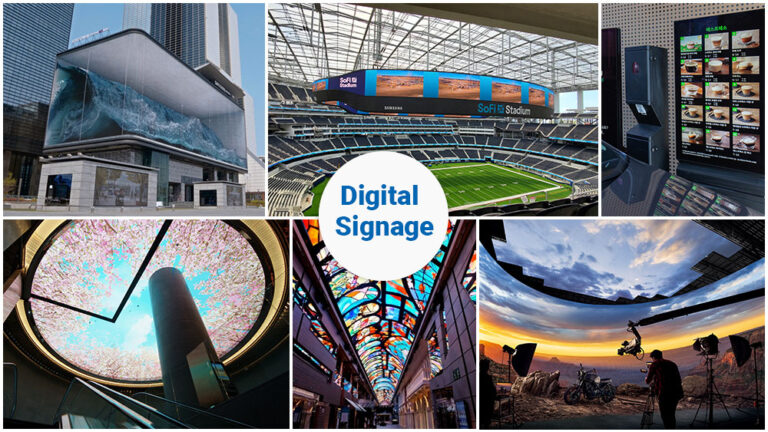